How The Resistance changed Muse – 10 years on 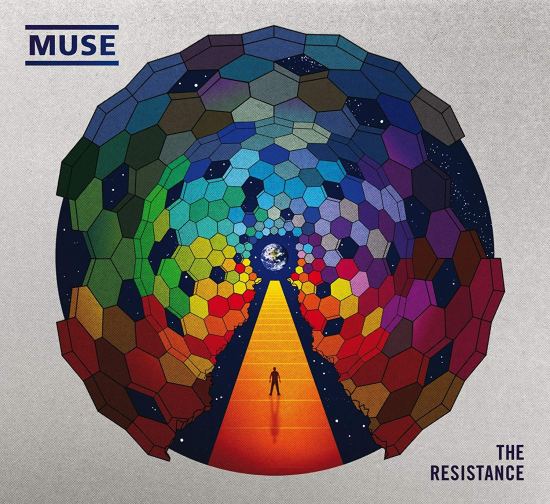 There’s a clip you can find online, much beloved by Muse fans, of the band drunk and raucous in the back of a tour van. Drummer Dominic Howard, wearing a mask that clearly belongs to someone from Slipknot, yells over and over again “SIT THE FUCK DOWN….SIT THE FUCK DOWN” while mimicking the band’s screamo, and helicoptering the absurd fake dreadlocks, while Matt Bellamy and Chris Wolstenholme fall about in hysterics.

It’s one of several such clips: there’s the infamous sweary rendition of ‘Feeling Good‘, along with the trio’s attempt to host a segment on Rage, and that rendition of ‘New Born’ on, of all things, Live & Kicking. They added to this shortly after the release of their fifth album The Resistance, where, asked by an Italian TV station to mime ‘Uprising’, the band switched places, in a nod to Nirvana’s similar escapades a decade prior.

However The Resistance is seen by many as the end of the Muse that we once new: anarchic, punky, misfit weirdos, and the beginning of Muse as festival stalwarts and pomp-rockers. Though some will disagree, The Resistance is the first time that Muse could be accused of being, well, a bit cheesy. Listen to the Flash Gordon style backing vocals on ‘Resistance’ or the unashamedly Queen-aping stacked vocal send-off to ‘United States of Eurasia (& Collateral Damage)’ and you hear a band playing with tongue in cheek.

The spiky riffs and frantic beats of Origin of Symmetry were traded in for the bloat of classic rock. On Origin the band used human bones as percussion: The Resistance features a clarinet solo. While Absolution had fused its proto-metal with classical stylings, there was nothing quite like the excess of the three part ‘Exogenesis’ symphony, which closes out The Resistance.

Each successive album had only raised Muse’s esteem: Origin of Symmetry brought them an international following, Absolution gave them their legendary headline slot at Glasto ’04, Black Holes & Revelations sold out Wembley. The Resistance was the first album that really divided fans. Some loved it, but many long-time fans hated it, and saw it as a corporate rock album akin to their dad’s Genesis collection.

Black Holes & Revelations had been massive, spawning a string of hit singles and confirming the band’s place at the forefront of British rock. It’s hard not to view The Resistance as a transition, and a somewhat awkward transition at that, from the underground to the mainstream.

Yet I find myself returning to The Resistance far more readily than The 2nd Law or Drones. It may be a little uneven, relying on a strong first half (as every subsequent Muse album has), but there are some fantastic songs here. ‘Uprising’, ‘Resistance’, ‘Undisclosed Desires’, ‘MK Ultra’ & ‘Exogenesis’ are all great.

What’s more I may stand alone in defending the oft-derided ‘Guiding Light’ as a genuine highlight.

The Resistance was the first self-produced Muse album, and over-self-produced at that. What The Resistance really lacks, besides focus, is grit. The riffs here simply do not have the bloodlust seen on ‘Hysteria’ or ‘New Born’ or even Showbiz tracks like ‘Uno’. There’s a preference for shiny surfaces which would become a problem by the time they were producing The 2nd Law, which sounds positively rubbery in parts.

As part of a wider story, The Resistance may be divisive. Did it signal new heights of commercial dominance (it won a Grammy and went No.1 in 19 countries) or creative plateau? However taken on its own merits The Resistance is a good album, and a worthy addition to an illustrious canon.