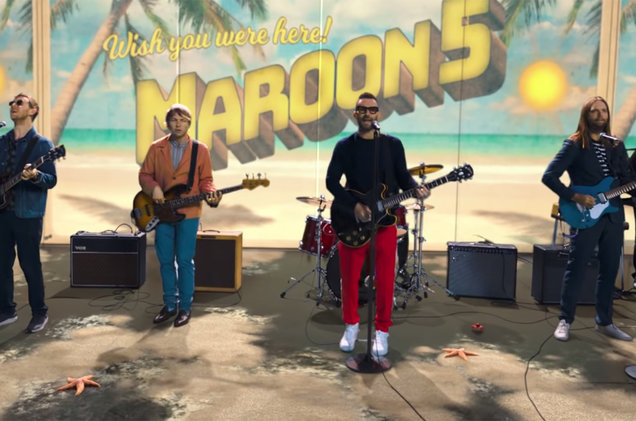 Covering a Bob Marley tune is a big ask for any band, even one with a shred of credibility. Then there’s Maroon 5.

‘Three Little Birds’ is of course one of the definitive songs on peace, well-being, spirituality. It essentially epitomises the idea of music as salve, soothing the soul and healing the ills of the world. It is a song that a lot of people hold dearly, and one that Maroon 5, as a commercial pop outfit helmed by a TV personality, are uniquely unfit to cover.

Now I don’t usually talk about covers. Ultimately these exist as their own quantity and do not diminish the quality of the original. If you’re lucky, they may even enhance the original, or interpret it in an interesting way. However when a piece of music is revised so drastically, and in a way that completely contradicts and sullies the core tenets and soul of the piece, then it is hard not to baulk.

Taken on its face Maroon 5’s ‘Three Little Birds’ is merely pedestrian. Neither so revisionist nor so authentic as to be in any way notable, it’s more of the figged-up white funk we’ve come to expect.

Quite how four people play stringed instruments yet only two can be heard is a question for the sound engineers. While Adam Levine’s delivery is coldly professional, as they so often are. Levine has lent his voice to so many projects within and without his band that it’s rare to coax anything out of him that doesn’t sound purely perfunctory.

However a glance at the video raises questions. Why does the Hyundai brand feature so prominently? Why do random inserted FX shots showing garish computer graphics exist in a video for a Bob Marley song about anti-materialism? What on earth do these elaborate VTs have to do with the song in any way? The answers didn’t take long to uncover. Queue the video:

As a practice, pop bands taking brand deals is nothing new. But to pick such an important song, not to mention a song so at odds with consumerism in general, to promote Hyundai off-road hatchbacks in conjunction with a multi-billion dollar sporting event, is unbelievably tasteless.  Just check out this behind the scenes video.

Director Joseph Kahn, himself no stranger to a spot of hackery, gives us the jist: “This commerical is a commercial, but it has a musical component to it.” Someone keep that Ivor Novello warm.

Commercialism and pop music go hand in hand. Clutching your pearls because a band you like wants a pay cheque isn’t productive. However when the song this well loved is inserted so clumsily into a complex and hyper-commercialised promotional campaign, you’re right to feel a little queasy.  This is bloated corporate gak. I’m sorry Bob.