Keep it messy, tell the truth – An Interview with whenyoung 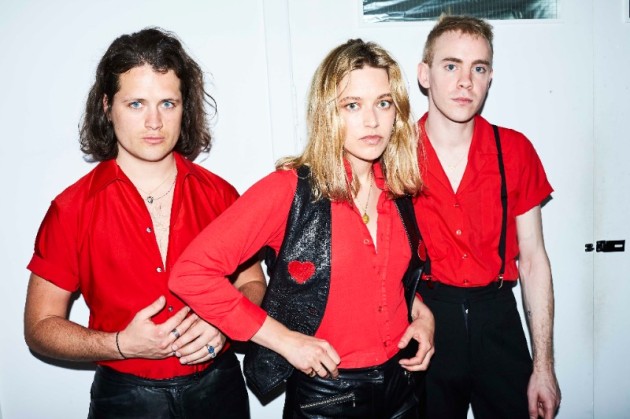 Limerick expats whenyoung are one of a clutch of bands on the verge of indie greatness. Their raw yet melodic sound, at once toe-tapping and dripping in existential dread, has marked them out from the pack. Their single ‘Pretty Pure’ is one of the best of the year. We sat down with Aoife Power (bass / vocals), Niall Burns (guitar) & Andrew Flood (drums) at Live at Leeds to talk inspiration, DIY film-making, and the future.

HN: ‘The Collector’ was the first song of yours I heard. I adore that song. Tell me how that came to be.

AP: It was written after watching a film by (French new wave director) Éric Rohmer. I really love his films, they’re really slow paced and very beautiful. The stories are always very normal and everyday. The people are often searching for meaning. That really inspired the song. Then we directed the video and we tried to bring that into the video too – a feeling of everyone being on the same journey, looking for meaning, and how we are all connected in that.

HN: All of your songs have a strong visual component, the videos are elaborate and seem to tell stories. Is the visual element something you’re passionate about?

AP: We definitely like being in control of that. We’ve directed the video for our new single. We really enjoy the video side.

NB: It’s not just about the visual side we’re very much…

AP: About the aesthetics!

NB: We’re very much about the aesthetics.

HN: Do you get in people with a very distinctive style or do you have an idea in your head before you start?

AP: We’ve done the last two. Before that we had our friend do it and we’ve been working with Joe Douglas who is the video…the video man…and the camera man

NB: We threw ourselves into it really. We had ideas for the videos. I think it was our management who suggested it.

AF: We have a friend of ours India Lee, who produces them with us. She’s amazing.

AP: I think we’re a little bit controlling as well…

HN: Music and video so often come together but it is so rare that an artist can do both.

AP: I guess the busier you are the less time you’d have for something like that. So hopefully we’ll have no time for it in the future!

HN: I want to hear about your single ‘Pretty Pure’. The song itself is so upbeat, yet the lyrics are devastating. It’s a real contrast. How did you come to write that?

AF: Actually a lot of our songs are like that. The music is upbeat, but there’s a hidden undertone in the lyrics.

AP: With the lyrics a lot of the time we’re talking about our own stories but writing it in a way that is like a story. That someone can relate to. We want our music to connect.

HN: How have you found connecting with your audience? At shows, on the road. How have you adapted to live performance?

AF: There’s been a really good run of shows. To an extent we were just thrown into it.

NB: The first tour we did was with Superfood. We actually learned a lot from them. They worked so hard.

AP: They used their time really well too. They were writing songs backstage.

AF: Yeah you can’t just party all the time!

AP: We’re off on tour with Peace. Then we’re doing some festivals. Then recording the album at the end of summer.