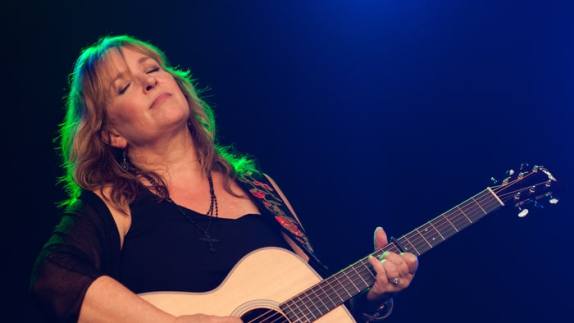 To call Gretchen Peters a veteran of country rock would be a disservice: she still has stories to tell, ground to cover. Over the course of nearly two hours, through her honeyed yet weathered voice with little overt embellishment, Peters reminds you of what an irreplaceable talent she is.

New album Dancing with the Beast (“It’s not about my husband” we’re assured) is hot off the press and the majority of the set is dedicated to it. This includes the beautifully washed out ‘Arguing with Ghosts’. This could well be the creed underpinning all of Gretchen Peter’s work. Much of her music hangs around the impasse of ‘what ifs’. A further cut, ‘Disappearing Act’, is fast on the way to becoming a Peters standard.

‘On a Bus to St. Cloud’ is thunderously received, in contrast to the cold sparseness of the tune itself. The definitive moment however comes with the double bill of ‘Five Minutes’ and ‘Idlewild’ from Hello Cruel World. The former in particular is pure heartache: a dedication to the quiet devastation of everyday life. The latter is a little more psychedelic and suggestive.

Gretchen Peters may be compared to her country alumni (though a New Yorker by birth) but her peppery barbs have more in common with Don Henley. Gretchen Peter is one of the few performers who can truly bear her soul, not as spectacle, but as surrender. A wonderful talent.