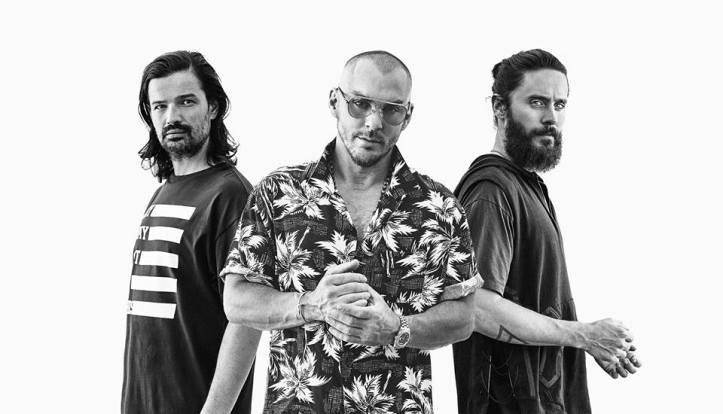 America is Exhibit A in the case against modern rock music, a perfect summation of the shiny, edgeless, hopeless state of the genre.

This is an album so desperate to please (and to soundtrack ads for Toyota off-roads or Bud Light) it stumbles gracelessly over itself, so desperate to connect with an imagined audience which it grossly underestimates and misunderstands.

It’s easy to dunk on rock bands for appealing to the sports arena masses. Muse, Coldplay, U2 all pander to different degrees. However Thirty Seconds to Mars resort to chant-along choruses so readily and so often, these hardly even feel like songs. The choruses are full of holes where “woah-ohs” serve as place filler for lyrics or meaning.

The millenial whoop is out in force. You can hear it on every chorus. Where once a lyrical hook might provide the germ of a great track – here “oh, oh, oh” is used time and time again as all-purpose chorus insulation. Thirty Seconds to Mars may have jumped the shark on ‘Up In the Air’ but America is somehow even more preposterous.

‘Walk on Water’ can at least take the faint praise of being enjoyable – even though its attempt to spotlight political tribalism is laughable – “the far right, the left view.” America is as puffed-up and vacuous as anything Jared Leto’s band has ever done.

Where the sheer melodicism of ‘Kings & Queens’ & ‘City of Angels’ made it possible to ignore Leto’s lyrical vagaries there is no escaping his limitations here. Nor the constraints of his voice – which is only capable of two modes: intense smouldering and throaty wailing. Neither of these mark him out as an engaging vocalist. Guest spots from Halsey and A$AP Rocky fail to gel and feel like the featherweight R&B cast-offs they are.

This may be the first streaming-friendly rock album – an album aimed at slotting inoffensively into Spotify playlists and rattling stadium rafters with meaningless pomp. These songs are essentially football chants – and like football chants they can occasionally uplift when you’re belting them from the stands pie in hand. But there is nothing of substance to any of this.