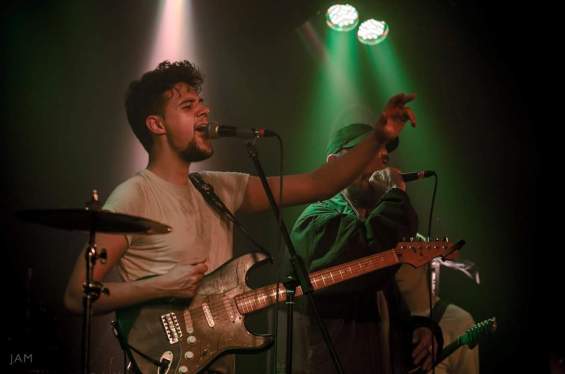 You shouldn’t judge a book by its cover, nor a band by its name. But a snappy moniker helps. Where would The Music be right now if they were easier to Google? ‘Tranqua Lite’ is a name that evokes many things: serenity, mystery, psychedelica. Great name for a band. Great name for horse tranquilizers too, if that doesn’t work out.

A five piece from Leeds, Tranqua Lite – Ben (vox / guitar), Jacob (drums), Toby (bass), Mike (guitar) and Calum (synth) – are an interesting proposition. Their track ‘Tempered Tides’ is deceptively easy on the ears. It may possess a sheen that pulls you in but once you’re there things start to get weird.

The groove itself is pretty gentle, offering something of a lifeline, whilst vocals echo from afar, and a veritable ocean of bizarre effects and synth tones push you this way and that. Exotic, challenging and magnetic. Ambition, thy name is Tranqua.

Imagine if Zenyatta Mondatta had a baby with ‘Aqueous Transmisison‘ by Incubus, and you’re nearly there. Certainly plenty to talk about, and we asked the band to do just that.

HN: How did Tranqua Lite come together?

Jacob: “It started with me and Ben really. The internet brought us two together in September 2017, through a joint love of various “Find a Musician” websites. Toby brought the bass a few months later, and then Mike joined us a month or so before our single release at Belgrave.”

“From the start we always envisioned how we wanted our music to sound, but it’s only really started to become a reality since Calum joined us on synth just before the end of the year.”

HN: Who came up with the band name?

Toby: “That was the handiwork of our singer, Ben. It’s a pretty striking name and that’s just the way we like it.”

“Deriving from the word ‘Tranquil’ it’s a nice depiction of being ‘in a state of peace’. Although a lot of our music isn’t quite tranquil, it’s certainly a reflection of what makes us happy to play and listen to.”

“That is, however, my best guess. We all have various ideas of the names origins and meaning.”

HN: ‘Tempered Tides’ is an absolute tune. How did that come about?

Ben: “Thank you! Well it started the way most of our material does, as a single riff or idea. As these things go we usually write the music before we know what the topic of the lyrics are going to be, that way I can weigh up everything the music embodies and form an overall idea of the narrative. We’ve heard people say that ‘Tempered Tides’ gives them a feel-good upbeat vibe, but the lyrics actually contrast the music entirely which is something we were aiming for.”

“I wanted to tackle the epidemic of homelessness in the North of England, but in a sort of ‘rally-up your friends’ kind of way. In a city you’re likely to talk to homeless people most days, and you can’t always stop to help them out. Sometimes a smile, small conversation or friendly hello can help people feel a little more included and good about themselves. Charities like Shelter and Emmaus are doing some great work in Leeds and you should support them if you can.” 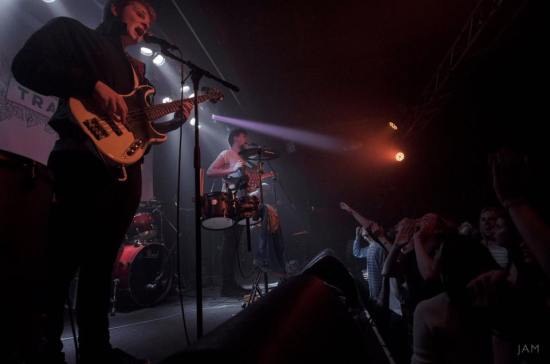 HN: Your music incorporates a lot of very different material and sounds, is it a balancing act keeping them all together?

Toby: “Pretty much! Each song we write, especially the newer set of songs we have, include obvious and subtle details. Sometimes it’s easy to upset the balance, but more often than not we are able practice to achieve a sweet spot.”

“Of course, it’s all a journey, we aren’t where we want to be yet, that’ll take a long time. But personally I think we are making great progress and that ideally clean, balanced and pleasing sound is definitely attainable at this rate.”

“In essence, our sound is constantly developing and changing to meet our changing tastes and inspirations, and that’s one of my favourite features of the band.”

HN: How was it playing Leeds Pride last year? The crowd seemed to really dig it.

Ben: “It was pretty surreal. Performing to thousands of people is exciting enough as it is, but up until that point we had only played a handful of unplugged shows to very small rooms. The event itself went off without a hitch and the audience were super responsive despite them all probably thinking “Who are these guys?”. Definitely one of those shows where we thought ‘How the hell did we manage to land this?’.”

Jacob: “So far we’ve been focusing on writing mainly, as we’re now starting to explore the sound we envisioned, and seeing how we can push and stretch that into something new and different. We’re also working on how we can make our live shows the best they can be.”

“If anyone’s been to one of our gigs, they’ll know that we’re partial to a big finish, so we want to expand on that aspect of the show so that people who come to see us for a second time two months later will experience a new, and better show from us. We think that’s really important.”

HN: What are you listening to at the moment?

Calum: “We’ve actually just started a band playlist to share what we’re all listening to with each other. We’ve all got similar reference points for the band but our individual tastes are pretty varied. It ranges from Vulfpeck to Bowie, Talking Heads to Tame Impala, jazz collectives and of course Toto.”

Hey Nineteen would like to just confirm that Toto’s ‘Africa’ is the best thing ever conceived by a human.

HN: Finally, and on the topic of tides: you’re shipwrecked on an island, you can only take one album with you. What is it?

Mike: “It always changes for me but at the moment I’d say Twin Galaxies by Delta Sleep.”

“The album as a whole is so well produced and the band have a crazy balance of instrumental and vocal songs that, in my opinion, keeps you always interested in what’s going on. Each song has a super interesting math focus which I really enjoy.”