Justin Timberlake and the fall of white mediocrity 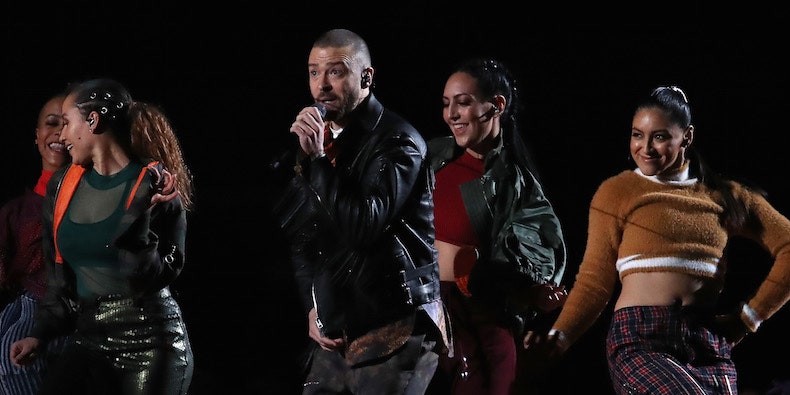 2018 is turning out to be a tough learning curve for Justin Timberlake. What should have been an effortless return to the top of the charts and a natural reclaiming of his pop crown has somehow turned out to be a comeback disaster. A slew of dire singles (along with an unintentionally hilarious promo video) got things off to a bad start, but the stinker of an album that followed really sealed the deal. Topping things off was a Super Bowl Halftime Show met with universal shrugs, followed by disappointing album sales that saw him beaten to the UK number one spot by the cast of The Greatest Showman. This should have been an easy comeback for Timberlake, but somehow it turned into a shit show.

So what went wrong? Since the early noughties, Timberlake has been a staple of the pop scene, his cred and cool rarely called into question. But in 2018, things are different. What Timberlake is fast learning is that being a mediocre white guy is no longer a guarantee of success.

This must come as something of a shock to JT, whose career has relied on precisely this white mediocrity to get to where he is today. Since the start of his career in NSYNC (and even earlier in The Mickey Mouse Club), Timberlake has got by on little more than some (admittedly pretty good) dance moves and a fuck ton of privilege. His clean-cut, boy-next-door image was embraced by white America, while Timberlake made his name white-splaining black music to an audience who didn’t know any better. Conceived and produced by the likes of Timbaland and The Neptunes, Timberlake served as the acceptable poster boy for music that was adapted from – and often created by – black artists.

Timberlake’s relationship to black music and black artists is a complex one, the most famous example being the ‘wardrobe malfunction’ that occurred at the 2004 Super Bowl in which Timberlake accidentally exposed Janet Jackson’s breast. That Jackson was blacklisted by the music industry, coerced into delivering an apology, banned from MTV and uninvited from The Grammys unless she address the incident while Timberlake got off scot-free (not only attending but winning at The Grammys that year, and then being invited back to the Super Bowl in 2018), tells us everything we need to know about modern attitudes to race and gender.

In 2004, being a white man meant Timberlake held little culpability for the Super Bowl incident, despite the fact it was him who exposed the breast. That Jackson was the owner of said breast apparently afforded her a higher level of responsibility, even though she was surely the victim of an over-zealous Timberlake. But since 2004, particularly in this new era of wokeness, the incident has been reassessed and reconsidered, with Timberlake emerging as the villain in the whole ordeal. Not only did his career benefit from the incident, but he made no public gestures to defend the woman he had (intentionally or not) publicly humiliated. Increasingly, people are seeing the injustice that was widely ignored in 2004. And finally, we are seeing Timberlake get some comeuppance.

Timberlake’s latest album is an attempt to appeal to an increasingly conservative America by making a record filled with hackneyed nods to country and bluegrass, Timberlake abandoning black-inspired RnB at a time when the US is turning frighteningly right-wing. Perhaps this is a coincidence, but the timing is certainly convenient. Man Of The Woods is Timberlake’s whitest album to date, and interestingly, also his worst-received. The record has been panned by critics (read our review here btw) and roundly mocked for its hamfisted, overly-earnest approach. His Super Bowl performance was criticised for featuring a projection of Prince – an artist who made his distaste for both posthumous cameos and Timberlake himself pretty clear. Prince’s ‘appearance’ also highlighted the gulf between the two performers – Timberlake’s vapid begieness in stark contrast to Prince’s natural magnetism – something that wasn’t lost on the millions tuning in.

The tides that once seemed to run forever in Timberlake’s favour are starting to turn against him. For the first time in his spotless career, people are beginning to reassess Timberlake’s talents, wondering exactly why they bought into his charming-but-vacuous brand. Unfortunately for him, there seems to be a direct correlation between the music-consuming public’s interest in issues relating to race and gender and Timberlake’s waning relevancy. Because as the former golden boy is fast finding out, in 2018, white mediocrity is no longer enough.