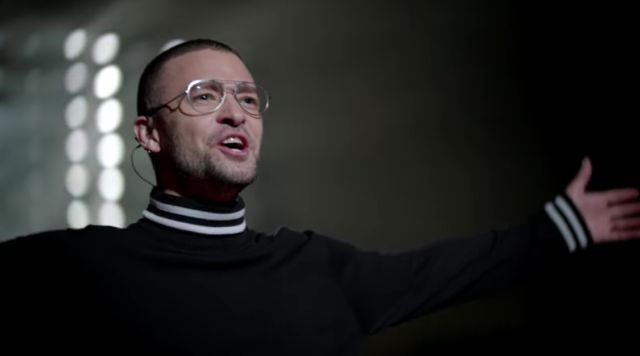 It seems strange now, but there was a time when Justin Timberlake was considered cool. Permanently dressed to the nines in sharp suits and crisp white shirts, he soared to superstardom peddling futuristic RnB to adoring audiences that either wanted to be him or fuck him. In many cases, both. Timberlake, for a time, had the world at his feet. He was the biggest male pop star on the planet with a suave, everyman cool that was at once endearingly relatable yet completely unattainable. But watching the video for  Timberlake’s new single ‘Supplies’, there’s no sign of the king of cool, the man who once famously brought sexy back now a muddled and unconvincing  pop star who has long since lost his way.

A confused sci-fi romp that tries (and fails) to deal with some of the social and cultural issues prevalent in today’s society, ‘Supplies’ sees Timberlake lost amidst a sea of meaningless imagery and big-budget ideas. It begins with a watery-eyed Timberlake staring at a wall of TVs showing clips of protests, racism, police brutality and Harvey Weinstein. It’s an embarrassing attempt at wokeness, Timberlake’s attempt to appear socially aware nothing more than an effort to stay relevant to his now grown-up and woked-up fanbase. But ‘Supplies’ says nothing about any of these themes, instead focusing on a perplexing end-of-the-world narrative in which Timberlake is positioned as some sort of saviour.

There are several moments that are downright cringe-inducing, something Timberlake has never been before. Watching him awkwardly dance down an illuminated pavement would be funny if it weren’t so uncomfortable, while close-ups of him and Pharrell Williams posturing and making faces are reminiscent of a couple of twelve-year-olds fucking about on their new YouTube channel. It’s badly directed and horribly ill-conceived, Timberlake’s attempt at producing something meaningful and interesting failing on both counts.

But perhaps it isn’t Timberlake who has changed, but his audience. His dance moves would have been trendy back in the early noughties when he was blossoming from boybander to solo star, a time when an expensive pop video was sufficient to sustain a healthy public interest and there was little expectation for pop stars to engage in discussions relating to race, gender or feminism. But as the tides have changed, Timberlake has recognised his survival depends on his ability to adapt. Unfortunately, he’ll need to do more than point to an image of Harvey Weinstein and look sad.

Timberlake’s woke reinvention is particularly grating given his not so woke past. He has long been subjected to claims of cultural appropriation, his career built on black music and artists while he serves as the white poster boy. When one of the most famous black artists of her generation, Janet Jackson, invited him to share the stage at the 2004 Super Bowl Half Time show, an on-stage cock up led to Timberlake inadvertently exposing Jackson’s bejewelled breast. Jackson was subsequently blacklisted by MTV and forced to release a full statement of apology. Timberlake, on the other hand, continued to enjoy huge success, winning a Grammy award a week later while still receiving heavy MTV airplay. While his career took off, Jackson’s never recovered. To date, although Timberlake says he and Jackson have made up behind the scenes, he has never issued a public apology or gone to any public efforts to vindicate Jackson for the irreparable damage done to her career. And let’s not get started on his relationship with Britney Spears.

Nowadays, young pop fans expect more from their idols. They want proof, actual receipts, that the stars they’re dedicating themselves to are worthy spokespeople for the causes they hold dear. Or at the very least, don’t hold views contrary to their own. But Timberlake has never been a spokesperson. Since his days in NSYNC, he’s been a haircut and a smile, a set of abs and a dancer in a well-fitted suit. Ten years ago, that was enough. But not any more.

In 2018, there’s little room for a pop star like Justin Timberlake. Though he has tried to adapt to the changing music and cultural landscape, somewhere along the way, he got lost. His last three singles have either been drippy pop duds (‘Cant Stop The Feeling’) or misguided attempts at reinvention (‘Filthy’, ‘Supplies’), embarrassing misfires that have divorced Timberlake from the cool guy image he once embodied. So why has this happened? The answer is simple. Our ideas of cool have changed, while Timberlake has not. He remains rooted in an era when megabucks pop videos were the norm, his dreadful dancing was considered cool and pop stars had no business interfering in politics. His efforts to drag his brand into the modern day have only exposed his shortcomings, his attempt to appear politically engaged highlighting a vapid – and hugely cynical – streak that has no place in modern pop. As he stumbles through his latest incoherent album campaign, delivering clumsy RnB flops, Justin Timberlake is reminding us what a good pop star looks like – and why in 2018, that just isn’t him.