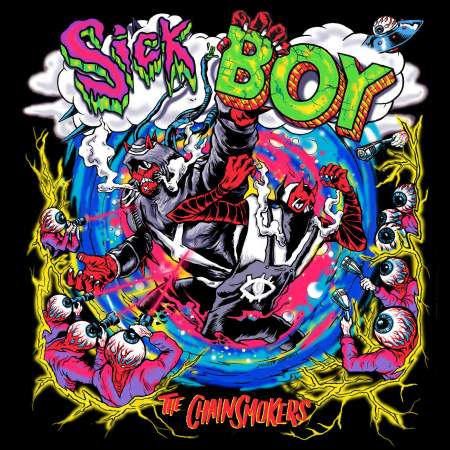 Listening to the new Chainsmokers song is like having the flu.

‘Sick Boy’ is a complete mess. Cringey rap-singing, portentous tone, frankly bizarre video plus the confusing message, every disparate element of this song is so wrong-headed it feels like a baboon high on coke made it by blindly mashing his fists onto an SSL terminal.

‘Sick Boy’ makes for a good demo. Not sure who you’d sell it to though – this doesn’t really fit in anywhere. Vainglorious piano stabs, drums drowning in overdubs, saccharine strings, nonsense lyrics. That sounds like no major pop hit I’ve ever heard.

Which begs the question: is this even meant to be a major pop hit? The Chainsmokers made serious hay off ‘Closer’. Presumably their label are indulging them. Is this their passion project? Their passion is to make god-awful music?

Politics can inform music and has done so successfully for many, many years. The Chainsmokers grapple with political discourse with a clumsiness reserved for a drunk man shitting himself in a lift.

The subtext here is so blatant it ceases to be ‘subtext’ at all and becomes the ‘blatantly fucking obvious’, which can be summarised as: Donald Trump – He’s Not Very Nice.

Politics in America is yoked to ideological extremes. Oh sorry you didn’t know?

What exactly even is the ‘sick boy’ conceit? He’s caught up in the political system? Or fame? Nationalism? Not like illness is a good metaphorical fit for any of these concepts. They call him the sick boy? Because he’s out of the system or because he’s part of the system? In the minute it took me to write that sentence I’ve already thought more about this song than The Chainsmokers have.

“How many likes is my life worth?” bleats singer Andrew Taggart: a line he conceived of whilst engaged in something more interesting than writing this song, like grouting his fucking wet room. A line he was so pleased with he insisted on patching it onto this Frankenstein’s monster of discordant sounds and ideas. Hell if the castanets are going in there then why not!

Perhaps Twenty One Pilots could have had this, if they ever come back. There is something to the melody. Not like it works or has any sense of progression, but the groundwork is certainly there for someone, anyone to try to work with.

The Chainsmokers won’t be hurt none, but they really should stick to collaborations. This may not be as stupid, nor as offensive as you might imagine. It’s just no good to anyone. It’s essentially refuse, a song with no audience; too polished to be alternative, too weird for pop radio. Landfill FM.

On their new track The Chainsmokers (of all people) are trying to be a bit arty. On the strength of ‘Sick Boy’ they don’t know Bauhaus from outhouse.