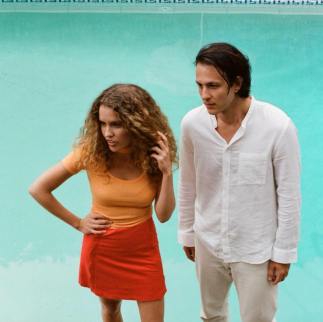 Given that Sunday is generally considered the most relaxing day of the week, it’s surprising that Sunday-inspired songs are often so melancholy. From Morrissey’s ‘Every Day Is Like Sunday’ to The Doors’ ‘Blue Sunday’, the final day of the week often gets a bad rap. And that’s before we even mention ‘Gloomy Sunday’, often referred to as the Hungarian Suicide Song. For whatever reason, rather than inspire joy and peace, Sunday often invokes feelings of sadness and apathy.

Looking to add to the list of Sunday melancholia is Australian duo Geowulf with their dreamy new track ‘Sunday’.

While Geowulf’s ‘Sunday’ doesn’t carry the sheer weight of some of its predecessors, there is nonetheless an unmistakably sad undercurrent running all the way through it. Despite its outwardly sunny veneer, ‘Sunday’ hides a wistful yearning, with vocalist Star Kendrick longing for Monday to roll around once more. The track glitters with a breezy jangle-pop melody, but Kendrick’s vocals betray the loneliness beneath.

‘Sunday’ makes for a moreish sample before Geowulf release their debut album, Great Big Blue, on February 16th. With its peculiar blend of laid-back vibes and summery sadness, it’s an irresistible tune made for wasted weekends spent counting down the hours. When the album drops, we’re hoping for six other tracks about how Monday through to Saturday aren’t all they’re cracked up to be either, but in the meantime, we’re happy to soak in the bittersweet sound of long and lonely Sunday afternoons.