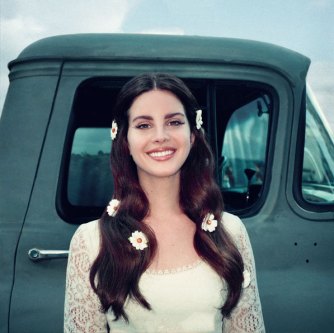 Lana Del Rey has confirmed Radiohead are taking legal action after noticing similarities between their song ‘Creep’ and her track ‘Get Free’. Writing on Twitter, Del Rey claimed Radiohead were seeking 100% of the publishing rights and were unwilling to accept any other offers. 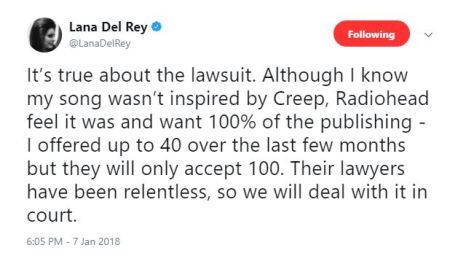 Needless to say, the pop-conscious public have come out in their droves in support of Del Rey, bombarding Radiohead’s social media accounts with pro-Lana comments. Listening to ‘Get Free’, there’s certainly a similarity to ‘Creep’ in the slow-burning verse, though that’s where any sameness ends. But regardless of the likeness (can you really own a chord progression, anyway?), you have to wonder why Radiohead would want to sue Lana Del Rey. Did she fob them off at Coachella one time? Or did she tell them The King Of Limbs was a navel-gazing exercise in auto-fellatio? Whatever the reason, if Del Rey’s claims are true, Radiohead are taking petty drama to new levels.

The whole thing gets even weirder when you consider Radiohead themselves were sued for plagiarism by The Hollies, after it was found ‘Creep’ ripped off their song ‘The Air That I Breathe’. How they now have the audacity to sue Del Rey is mind-bending in its hypocrisy. Is this a warning so future bands don’t accidentally copy the catchy chorus of ‘Morning Mr Magpie’? Maybe Del Rey thought the chords were copyright free these days, given that Radiohead never even play the fucking song any more. Hilariously, streams of ‘Get Free’ have rocketed since Del Rey let the cat out of the bag, so as long as Radiohead don’t get their way, she’ll get a nice windfall from the whole ordeal. And what a happy ending that would be.

While Taylor Swift remains the queen of suing people just for fun, Radiohead are coming for her crown. It’s a pity that a band historically so generous with their music have become so litigious and mean-spirited, and surely they have nothing substantial to gain from a nasty squabble over an album track. Perhaps if the Oxford lads spent a bit less time seething over ascending pop icons, they might make some progress on their next album. Let’s see if you can produce something half as good as Lust For Life this time around, shall we boys?