Give It To Me – Miya Folick – Review 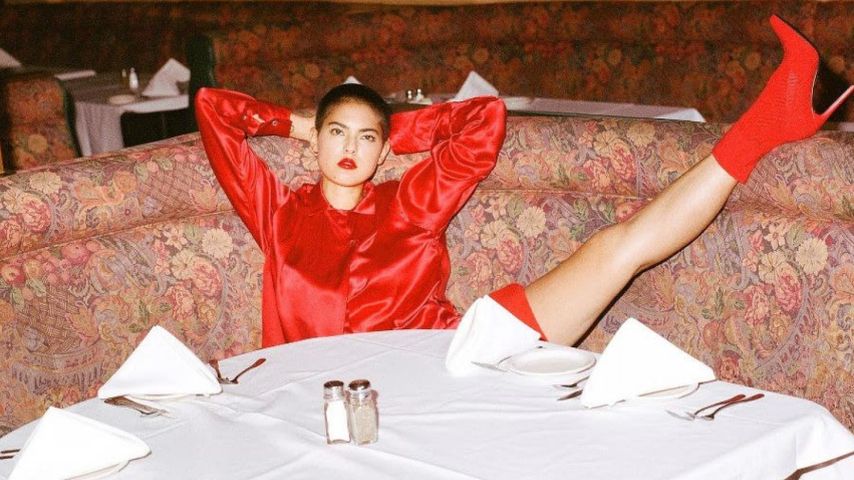 Angled into three crooked stances, Miya Folick stares archly from the pastel pink cover of her newest EP. Her expression suggests distaste, as though wondering why we have interrupted her yoga session to stare at this oddly compelling sight. But if Folick appears standoffish, it’s likely because – as we’ll soon find out – her faith in people is dwindling.

Composed of five songs, ‘Give It To Me’ is a fraught, jagged collection. Folick herself describes the EP has being about observation, the feeling of watching rather than partaking, and realising this is OK. In fact, it can often be less painful than real interaction. It’s something Folick points to on opening track ‘Trouble Adjusting’, a song that details the awkwardness that comes from failing to find one’s place in a social situation. “Girl looks at me, says “Who the hell is she?” / I think I’m having trouble adjusting,” Folick laments over a thrash of garage guitar. As the track reaches its taught conclusion, there’s no sense Folick is any closer to finding her rightful place, the track ending with a sigh of “How am I to do it again, if I can’t recall how it was in the beginning?” It’s a rhetorical question she lets hang, as though resigned to never finding an answer.

‘Aging’ is the EP’s highlight, a nostalgic snapshot that explodes into a ferocious burst of frustration. Folick begins by painting a sepia picture, setting the scene in a hallway where two lovers meet. It bubbles with the excitement of new romance, but rather than bloom into something beautiful, it soon rots and dies. “You are ageing / Quickly inside of my memories,” Folick spits, the track morphing from a tender trip down memory lane into a pointed fuck you.

What ties Folick’s narratives together is the theme of disconnect. She describes the EP as a “collection of songs made from a solitary place in one of the most social times in my life,” and we hear this in the quiet, fizzing rage that perturbs the record from start to finish. Folick’s tracks are full of people, yet her connections with them are seldom positive. “Let’s pretend that I’m human,” she sings on ‘Let’s Pretend’, questioning both herself and her place in the world. We’re reminded of the bent figure on the EP’s cover and wonder whether this is how Folick views herself – crooked, irregular, other.

It’s not until penultimate song’Give It To Me’ that Folick uninhibits herself entirely. The slow, creaking guitar track sees Folick asking for a second chance, though who this is aimed at, and exactly what happened to her first chance, remains unclear. What’s plain, however, is the urgency and desire Folick feels. She screams and groans her way through the song, her untethered vocals making for uneasy listening, her wails growing more desperate as the track pushes on.

‘Give It To Me’ feels like an ending, in that it’s the culmination of Folick’s ire packed into one brattish tantrum, but she isn’t quite done yet. A cover of Joni Mitchell’s ‘Woodstock’ sees Folick in a more plaintive mood, cooing over gentle, echoey guitar. It’s more polished than the rest of the EP, and after four thumping tracks that have seen Folick push her voice to its gravelly limits, ‘Woodstock’ makes for a pleasant change. The track pictures the idyllic utopia of Woodstock, a place where even “bombers riding shotgun in the sky” are turned into “beautiful butterflies”. After an EP that has centred on alienation and observation, it’s little wonder that Folick’s mind turns to unity at the record’s end, yearning for a time and place where making connections didn’t seem so hard.