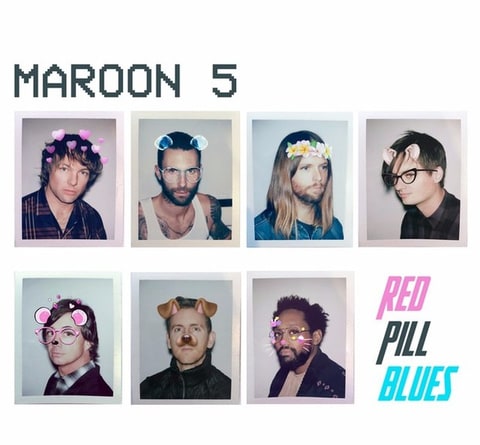 Red Pill Blues is functional, in the same way spark plugs or a formica counter-top is functional. There is a need, there is a market, and this is a product.

Bemoaning Maroon 5’s thunderous fall from grace has gotten tiring, even for me. Listening to them chronologically is like drinking scotch, and each time a new album comes out, someone adds a little more water, then a little more, and a little more, until eventually your cup is overflowing with grey fetid fucking effluence.

However, one assumed V was surely the nadir, the darkest moment before some form of inspiration.

Yet Red Pill Blues is just as bland, uninspired and depressing as V, which at the very least had some enjoyable singles and a cover of ‘Sex and Candy’ by Marcy Playground; a call back to Maroon 5’s origins in the crucible of 90s alt-rock.

I say depressing not because the album is downcast, down-tempo or downtrodden, but because it spotlights a band devoid of soul. Maroon 5 are like one of Jim Henson’s Podlings; a once sparky band that’s had the life sucked out of it.

The person doing the sucking here FYI is frontman Adam Levine. Levine felt the first twinges of irrelevancy after Hands All Over (a good album) under-performed. His ceaseless desire to remain en vogue has forced Maroon 5 to abandon everything that made them interesting.

Red Pill Blues is benign pop nothingness. Without even touching the bizarre and disastrous title and artwork, this album tries so hard to be of the moment whilst also being inoffensive to as many demographics as physically fucking possible.

The results are songs like ‘Don’t Wanna Know’ and ‘What Lovers Do’; repetitive, familiar pop songs with enough tropical sheen to keep them on trend. The guest stars here feel like concessions rather than artistic wishes fulfilled. Kendrick Lamar sings a verse here, A$AP Rocky there, SZA too, even Lunchmoney Lewis (yes, the ‘Bills’ guy); all to no end whatsoever.

It’s tempting to at least call this album smooth, mellow. Certainly it is not a difficult listen. But this is not an attribute; a river flows on by not because it was designed to please the casual eye, it does so without any consideration of the sort.

‘Cold’ is the only moment where you feel like a vision was realised, the only concept fulfilled without the shroud of trend-humping compromise. Not to say it is a great song, but ‘Cold’ sets out to create a spooky vibe and it captures that. To journey through an album of sterile repetition to reach a single moment of semi-coherence is not a journey worth taking.

Hearing this in the club or waiting for your turn in a barbers, you may tap your foot to one of these tracks. That is literally the limit of engagement that these songs allow. Perhaps an aspiring producer might use this album to discern which effects and equipment are on trend. They are the only people on the fucking planet who stand to gain anything by suffering through this ball-achingly useless flatline of an album.