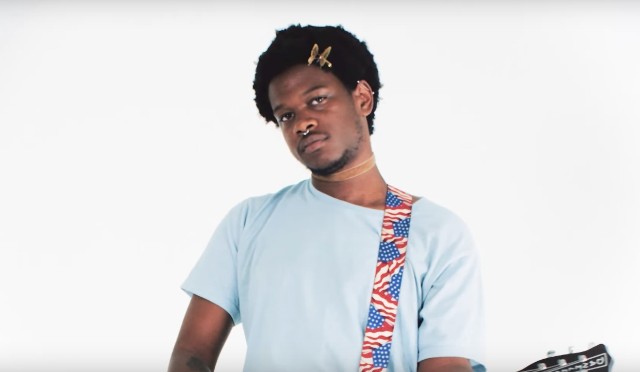 Do you ever just sit and think about how absolutely dreadful it must be to be straight? I mean truly awful. Only being able to order beer at bars and having to wear shorts way into the winter. Insisting you can’t name more than two Madonna tracks but having an unnerving knowledge of all things Kings Of Leon. Having to slap your male friends on the back as hard as you physically can while taking part in a one and a half second embrace. Listening to Radio X and having to pretend Chris Moyles is anything other than a dreadful waste of human flesh. Awful, awful, awful.

Anyway, Shamir basically says all that better than I can.

On his lo-fi new single, 22 year old Shamir dismantles the straight boy myth. “Can someone tell me why I always seem to let these straight boys run my life?” he muses over muddy electric guitar chords and sparse percussion. It’s a question that should resonate through the queer community, though Shamir admits it’s a question he doesn’t have the answer to. What he does have is a series of jibes aimed at unremarkable hetties “clinging to a false sense of pride” caring only about “how they’re viewed from the outside.”

Shamir first burst onto the music scene back in 2014 with snappy, glittery disco-pop anthem ‘On The Regular’. But much has changed since then. Shamir has parted ways with his record label, self-published a grungy second album and spent time in hospital where he was diagnosed with bipolar disorder. The Shamir of 2017 is certainly more subdued than the sparkly Shamir of old, but he is no less special, still a beautiful, undefinable anomaly amidst a sea of beige. On ‘Straight Boy’, Shamir shows he is sparkling still, though more in his unfettered queerness and rejection of record label expectations than through snazzy day-glo pop jams. This moody new direction suggests Shamir has been through a lot since his breakthrough three years ago, but demonstrates his unwavering power to transform his thoughts and experiences into exquisite, compelling — and wonderfully queer — pop music.