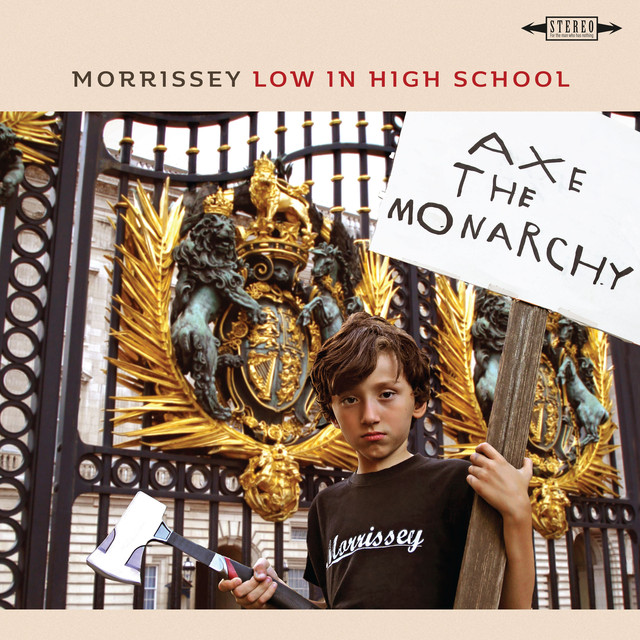 You know, I too have spent the day in bed. Not today, but one day a few years ago. I, on the other hand, did not have the privilege of being able to record a song about the experience. Morrissey, on the other hand, does. And that’s just what he’s gone and done on new track, the aptly-titled ‘Spent The Day In Bed’.

The first track taken from the atrociously-named forthcoming album Down In High School, ‘Spent The Day In Bed’ is an unusual, but in many ways unsurprising, offering from pop’s resident miseryguts.

A plinky intro isn’t what you expect from a Morrissey single, and especially not the lead single from a new album. Historically, Morrissey has favoured the more meat-and-two-veg approach of whining electric guitars coupled with rousing drums to make anthemic, self-righteous pomp rock. And very good self-righteous pomp rock it is too. But here Morrissey is slightly more subdued, though his lyrics remain as loaded as ever.

As the album artwork makes abundantly clear, Moz is still no fan of the monarchy. But ‘Spent The Day In Bed’ steers clear of rehashing the famous sentiment of ‘The Queen Is Dead’, instead offering the listener tips on good self-care practices. So what’s Morrissey’s answer to life’s crushing misery? Turning off the news and remaining in bed. It’s not quite enough to fill the pages of a self-help guide, but the sentiment itself is not really a bad one.

In recent years, Morrissey has been criticised for (among many, many things) losing touch with ordinary folk. He does little to override that notion here, sounding rather smug as he boasts of his duvet day while “the workers stay and slave”. Not everyone has the luxury of staying in bed all day, Grandpa Joe. But in his bedridden state, he has come up with some wisdom to impart. Namely, that the news only serves to frighten and disorientate, providing little benefit to the masses it claims to educate. While there’s certainly some truth in this, you get the feeling Morrissey has probably been leafing through too many copies of The Express while propped up on pillows in his California King.

The issue with ‘Spent The Day In Bed’ is that it doesn’t really have a chorus, a pity given that Morrissey has proved many times he’s more than capable of penning a stellar pop refrain. What we have here feels like more of a bridge that should amount to something, but ultimately fails to do so. Instead we get a fairly shoddy breakdown in which Morrissey repeats the line “Time, do as I wish”, before the verse resumes. It’s a very rare example of a track with a verse better than its chorus, joining the likes of Dido’s ‘Thank You’ on a pretty exclusive list.

‘Spent The Day In Bed’ has the rather unpleasant feel of a lecture from an ageing relative, a grandparent who is spending their twilight years telling the youth they deserve to be penniless and miserable from the comfort of their mansion. But then isn’t that exactly who Morrissey is? He seems to be finally growing into his misery, his gripes less revolutionary, now more rooted in privilege. While the track’s anti-work sentiment echoes that of Smiths song ‘You’ve Got Everything Now’, here it comes from the perspective of a man who, you know, really does have everything.

‘Spent The Day In Bed’ is rather sparse for a Moz track, though this lighter arrangement gives the stale Morrissey formula a minor spring clean. That said, the Morrissey sound is still unshakeable, distinct and removed from time and trends, Moz’s churlish vocals as vicious as ever. The flecks of Spanish towards the track’s end are a nice nod to Morrissey’s adoring army of Latin American fans, though perhaps even they will miss the rockier feel of his earlier work. Still, even if it’s not the Christ-like return to form some were hoping for, ‘Spent The Day In Bed’ feels like a fitting – albeit rather humdrum – addition to Moz’s back catalogue.