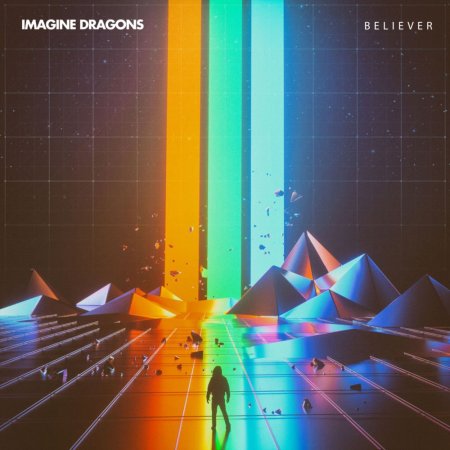 The Vegas boys who call themselves Imagine Dragons did not fall into fame. They grafted to carve out a niche for themselves. It was only after years of grass roots support that they reached stratospheric success with their debut album Night Visions and smash hit ‘Radioactive’.

That seems like a long time ago. Evolve is a bloodless and tin-eared third album.

The Dragons defined themselves with their beat driven indie sound, a take on mainstream rock that relied more on the thrum of electronic dub than riffs and kicks. They still have that style. In fact that’s all they have.

Evolve is full of big rock tracks with hollow, vaguely triumphant sentiment. It’s a record that, unwisely, relies solely on the vocal talents of Dan Reynolds for dramatic oomph. The instrumentation is little more than wallpaper. Generic synth tones abound, with plodding four on the floor beats and a crushing air of predictability that wafts through like a cloud of malodorant.

‘Believer’ shows some sign of life, with calamitous beat and acoustic guitar. The sinister tone contrasts with the fact it’s basically a power ballad, and that is the classic Dragons formula. There’s a heaviness here. It wont be starting parties anytime soon but it could definitely soundtrack a shoalin monk training montage.

The good stuff is again undone by the shrill, piercing caterwauling of Reynolds in the chorus, who bludgeons any nuance out of the song one hammer blow at a time.

That cool boxing scene in the video couldn’t be more apt. It’s Dan Reynolds, knocking the shite out of any vestige of interest I have in Imagine Dragons.

“ I wanna try again / Can we start over?” he ponders as the album nears a close, and I’m thinking yes – be my fucking guest.

The sad truth is a lot of the blame lies with the likeable front-man. He’s forgotten what made his style special, and has lost his ability to emote in favour of a brash, abrasive vocal roar. It could be growing pains or it could be that the Dragons are now getting advice from Swedish hitmakers Mattman and Robin. Certainly it sounds like Reynolds trying to fit a particular mould.

There’s impassioned delivery, and then there’s just yelling. Reynolds basically just bellows every chorus, drawing breath like he’s making balloon animals. This is the worst vocal performance I’ve heard all year, and it’s not like Reynolds doesn’t have the chops. It’s a lack of imagination.

Certainly the chorus of ‘I Bet My Life’ was so farcical it was basically a meme, but here things are far worse.

“Thunder / Feel the thunder / Lightning and the thunder“ goes the chorus on (you guessed it) ‘Thunder’, a career worst hip-hop blunderthon with lyrical clunkers for days: “Just a young gun / With a short fuse”. With Linkin Park’s One More Light and now this mess, 2017 could be the year of bloated rock disasters.

Evolve isn’t quite as bad as that album. The magic of their barn-storming first EP can still be felt on ‘Walking the Wire’, ‘Mouth of the River’ and especially ‘I’ll Make It Up To You’. They save the record towards the mid-section.

But by the time the album closes on ‘Dancing in the Dark’, with Reynolds mumbling sleepy nonsense like a tramp whose stood up too quickly, it’s clear something has gone horribly wrong.

Imagine Dragons have gone from soundtracking a generation to barely being an after thought. There is shockingly little of worth here, besides some mid-album winners. It’s a crying shame: I once thought Imagine Dragons were the future of rock. It’s clear now – the only thing they’ll be soundtracking is beer commercials and sport on Channel 5.