For Crying Out Loud – Kasabian – Review 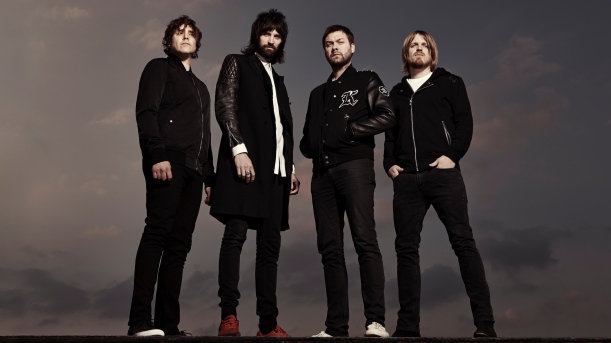 Moaning about guitar bands moaning about the state of modern music is almost as boring as the guitar bands themselves. Kasabian are by no means the only fuddy-duddy rock band guilty of bleating on about the state of the charts, harking back to the good old days when everyone wore a trilby and watched The Mighty Boosh, but they don’t half do it an awful lot. “There’s only us, Arctic Monkeys and The Libertines left,” Tom Meighan recently told NME, claiming they’re among only three bands to have survived the noughties indie scene. And though it’s tempting to deride Meighan for his pomposity, he does sort of have a point.

Kasabian have persevered where other bands have fallen, disintegrated, consciously uncoupled, lost member after member until they’ve become mere skeletons of themselves. But it’s not just sheer determination that has helped Kasabian survive, but their ability to churn out consistently solid albums, something most of their contemporaries failed to do. With their latest release, For Crying Out Loud, Kasabian are not only hoping to carry on this tradition but – wait for it – save guitar music altogether. Because of course they are.

The good news for Kasabian is that although masses of critics will want For Crying Out Loud to be a dud, mocking Kasabian for being a bunch of out-of-touch Luddites in the process, the inconvenient truth is that this is another very solid album. Very Kasabian, sure, but solid nonetheless.

‘Ill Ray (The King)’ is a punchy opener, a driving, chaotic surge of energy, the production tight and polished while maintaining an anarchic, rambunctious edge. Lyrically, the track is one of many that suffers from some dodgy wordplay, the band squeezing in any old rubbish for the sake of an easy rhyme (“I’m trying to start a war / I heard it all before/ Now go fetch me a milkshake don’t forget the straw” springs to mind) but then, no one is really listening to Kasabian for their lyrics, are they?

Lead single ‘You’re In Love With A Psycho’ makes more sense in the context of the album, though it remains among Kasabian’s weakest singles. And for all its strengths – its consistency, its range of sounds, its pure determination, For Crying Out Loud is an album low on obvious singles. ‘Twentyfourseven’ is perhaps the clearest choice, embodying the spunky let’s-av-it Kasabian attitude, similar in sound to previous album 48:13, but it lacks the immediate appeal of, say, ‘Eez-eh’ or ‘Fire’.

However it’s the less radio-friendly tracks that are the most enduring here. ‘Are You Looking For Action?’, a track that surpasses the eight minute mark, is more dance pop than indie rock, propelled by a disco-inspired riff before descending into a long instrumental breakdown full of jazzy sax flourishes. It’s an unusual move for Kasabian, but one that undoubtedly pays off. Elsewhere, ‘All Through The Night’ is a wistful acoustic ballad that channels the melodic flow of The Beatles while ‘Comeback Kid’ deploys dramatic horns and Spanish-inspired guitar for the best chorus on the album.

For all their mouth, Kasabian have proven that they really are one of the UK’s best guitar bands, capable of not only surviving, but adapting and thriving. Has For Crying Out Loud saved guitar music? Of course it hasn’t. But then again, it never needed saving in the first place.