So how was Live at Leeds? 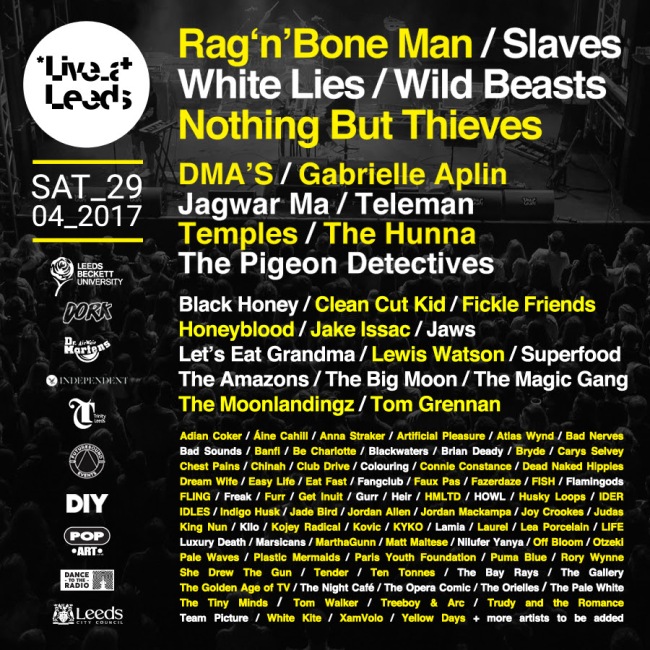 Despite a greying start to Saturday afternoon, the city was thrumming with activity as the first bands set up for Live at Leeds 2017. Leeds was ready.

Bars, Clubs, the SU’s and two churches were but a few of the venues hosting bands through the day. The First Direct Arena, Leeds’ new arena is a recent landmark on the skyline. Nobody played there mind, but you did pick up your wristbands up there. I suppose they wanted to get in on the action somehow.

Though most of the headliners played late in the evening, bands were playing from mid-day. A lot of venue-hopping ensued, which gave the festival it’s unique feel. Most inner-city festivals are based around just a few larger venues but the emphasis on smaller, disparate venues gives the festival a feeling of scope. Hopping from a bar that fits 100 people to a venue that holds 2,500, to a church and then the LUU Refectory gives the day a ramshackle vibe. The only time this becomes a problem is with the Brudenell Social Club, a great venue, but one located far out of the city centre, and one unlikely many people can factor into their schedule.

The bands too are stellar. Local bands got a look in, with some unsigned bands even getting a gig in the bars in town. The headliners are three indie rock bands (White Lies / Wild Beasts / Nothing But Thieves) Slaves and then Rag’N’Bone Man, who cuts a lonely stance as the only high-ticket performer who could feasibly be played on Radio 2. A bit more of variety may have been desirable however clearly this is a festival for indie rock, and the promotion makes that fairly clear.

LaL17 was an illustrious showcase for the heights of home-grown British talent. Of the bands we saw Black Honey, White Lies, Nothing But Thieves and especially Fickle Friends, were fantastic. It was also a great chance to see the city and all it’s myriad venues. Leeds is so important for indie rock, and the festival grows year-on-year. Next time, be there.

We filmed a bit of the action from the day which you can watch at your leisure: