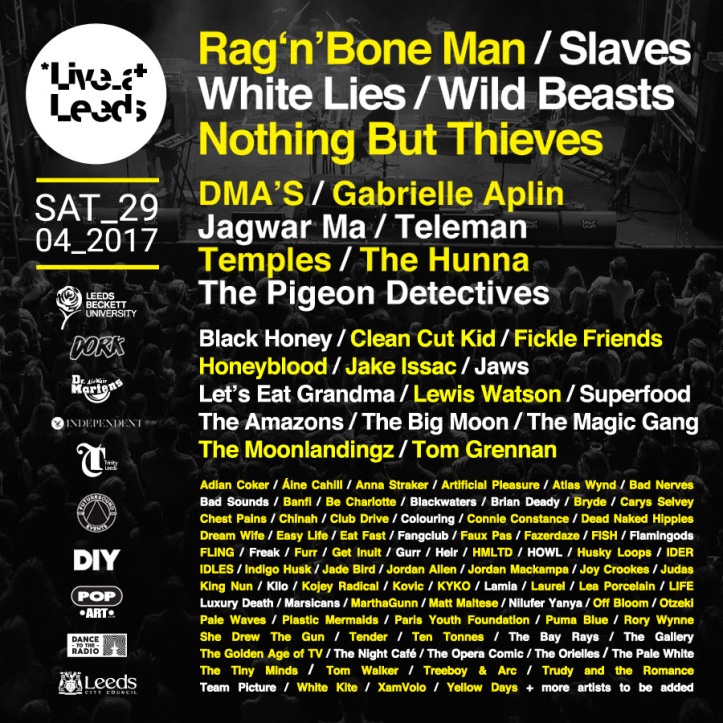 We are just weeks from Live at Leeds and the hype is real. Year on year the festival has continued to grow, showcasing a range of local talent and headlining acts from all walks of music. In the coming weeks we will look at the venues, the best local bands, a well as a roundup of our personal faves.

Part of what makes Live at Leeds special is the chance to see the local talent. Guitar music is huge in Yorkshire. It’s right up there with IPA, pastry and rugby league. So at Live at Leeds there is plenty of local bands to check out. Here are some of our picks.

Happy-go-lucky Marscans embody the local spirit perfectly: upbeat and good-natured with a bit of grit too. Their latest track ‘Friends’ showcases the quiet-loud dynamic at the heart of their sound, with pretty vocal harmonies giving way to pummelling drums in the chorus. For fans of indie rock who like to have a dance too.

A singer-songwriter who’s approximately 70% hair, shaggy headed Casey Lowry has enjoyed a slow-burn of buzz around his debut single ‘Trampoline’. Released in February the track has aroused the attention of Radio 1 and racked up nearly 100k streams on Spotify. It’s a heartfelt and silly and refreshing in it’s honesty. He sings from the heart in a way many young performers struggle to.

From polished to just demented, Chest Pains are pretty hard to figure out, and not just because it’s almost impossible to Google them without ending up looking at a stock image of a man with heartburn. Sing-shouting like GG Allin over the top of a fairly tight and orderly indie rock framework, it’s certainly a Marmite sound but a good listen for anyone with fond memories of post-punk.

Despite the monosylabic moniker, four-piece Clay have surprising range. Their single ‘Sun Dances’ channels indie-rock through a kaleidoscopic haze of gospel organ and saintly backing harmonies. The keys show up again in new single ‘6AM’. The video follows frontman Joe Harvey stumbling along Call Lane, pissing off some bouncers and chucking someone’s chips for no good reason. It’s alright mate, we’ve all been there…