The Elephant Trees are an indie-folk outfit from Guiseley. Taking the playful style and wit of folk and applying it to a heavily distorted, hard rock sound, they play like Laura Marling on speed. Their debut single ’90 Degrees’ is out now, and we caught up with band member Sam Hughes-Jones to discuss all things Elephant Trees.

HN: How did you guys start playing together?

SHJ: We actually started out as a school project. Martha (guitar & vocals) had to do a leadership project so she decided to form a band.

HN: That project worked out pretty well then.

SHJ: Yeah! We were originally just going to do it for the duration of the project. But when we did the gig at the end, it was a lot of fun so we thought ‘let’s keep doing this’.

HN: So the project was to record a song or play a gig or something?

SHJ: We had to put a set together, think it was like a twenty minute set, that was nearly two years ago now…

HN: Where did the name come from?

SHJ: It’s relatively self-explanatory…it’s weird, it sounds like it should have more depth to it than it does! There’s these trees on top of a hill near where we all live, and from one angle they look like an elephant. It’s a local landmark for us, if you’ve been away. When you see ‘the elephant trees’ you know you’re almost home.

HN: So if someone were on some sort of open top bus tour of Guiseley, the tour guide would be like ‘and on your left you’ll see the elephant trees’?

SHJ: If there is ever an open top bus tour of Guiseley I would be quite impressed… 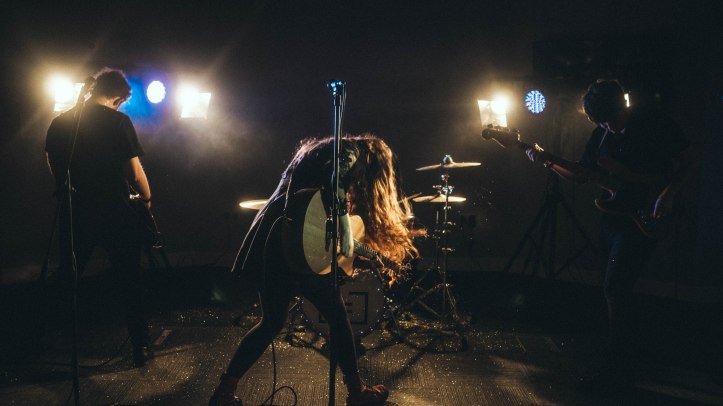 HN: Would you say any particular sound, band or style inspired you?

SHJ: A lot of it comes from Martha being a singer-songwriter beforehand. So you get some of the Ed Sheeran and Laura Marling influences in that, but balanced out by some of the heavier bands that we like, mostly Muse and Biffy Clyro.

HN: I’m surprised how well the folk and hard rock elements rub-up against each other.

SHJ: It’s surprising, and you only get a bit of that flavour in the single, we have a lot more to our sound. This is the heavier end of what we do. The styles come together differently in different songs.

HN: So the new single ’90 degrees’ is out and we love it. That riff is so hummable. Is that how the song started, with the riff?

SHJ: It began, as a lot of our songs do, as an acoustic song that Martha had written. So it had the looped guitar bit, and I was like, ‘that would sound really cool with loads of distortion on it.’ The riff was the base of the song.

HN: It’s almost like a two-speed song, when you get to the final third the pace increases and it becomes a totally different thing. Was that planned from the start or did you just play it that way and decide to incorporate it?

SHJ: There was almost a whole separate song written, which we wanted to bolt onto the end whilst keeping up the same energy that was there throughout. It was that end section, we wanted a more repetitive part, a really driving, building end to the song.

HN: I like your video. I bet it took a while to clear up all that glitter though…

SHJ: Oh yeah we spent a good hour afterwards hoovering it up! It was a big converted office space, I think they are going to have to change the aesthetic of the room to be ‘glittery’.

HN: Was that one particular person’s idea?

SHJ: That would be Martha. One time she had some glitter-gell, and she put it on all of us, and then we played one of our favourite gigs ever. So we wanted to incorporate that into the video. I’m still finding glitter everywhere. I found it on the cat the other day.

HN: Have you played this song live before, or will your launch party at The Wardrobe be the first time you play this to a crowd?

SHJ: We’ve been playing it for a while, we’ve been taking it out of the sets though to prepare people. It’s a proper live favourite of ours.

You can find The Elephant Trees on Facebook. They are celebrating their new single with a headline show at The Wardrobe in Leeds, tickets here.