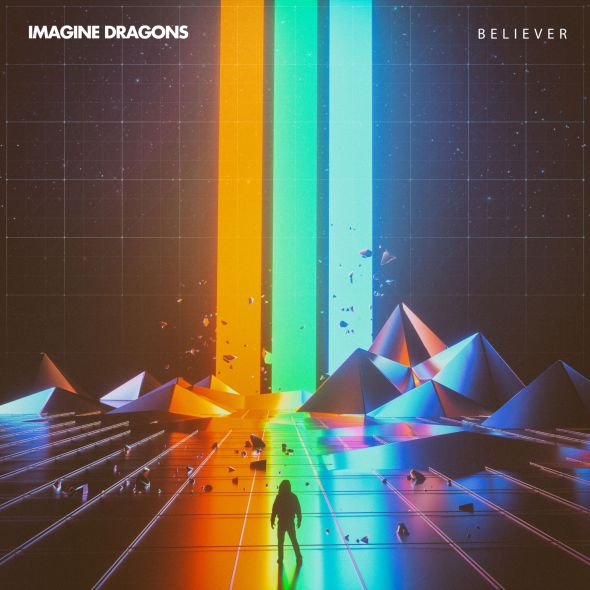 Contrary to the thrust of their comeback single, my enthusiasm for Las Vegas rockers Imagine Dragons is faltering. Their new song ‘Believer’ is three minutes and twenty three seconds of shrill buzzing sounds. It’s a million miles away from their wonderful breakout hit ‘Radioactive’, or even their patchy second album Smoke + Mirrors. It’s a cause for concern if like me, you once thought this band were the Next Big Thing.

Is ‘Believer’ a disaster? No. Imagine Dragons still have their unique, drum-heavy sound. On paper, no single has toed the line between hip-hop and folk so closely since ‘Radioactive’. They still hold a strange and captivating space in popular music. The problem isn’t with the band losing their identity or what makes them unique. The problem is with Dan Reynolds.

Reynolds’ fantastic range and breadth of styles, from rapping to rock star hollering, are all exhibited here. But he also presides over a truly god-awful chorus. Compare the inviting and memorable choruses of ‘It’s Time’ or ‘Demons’ with this noise, and it’s painfully obvious that Reynolds has lost something.

There is nothing tuneful about this at all. The chorus is made up of discordant yelps, and Reynolds’ singing of the titular refrain is horribly strained. It ultimately consigns their comeback to little more than luke-warm.

This wouldn’t be a problem if they were an obscure indie band. If their aim was solely to make peculiar, glitchy pop music then I would be happy for them getting on with that. But their ambitions were so much more. Whilst they did have some grit about them and more than earned their indie cred through their exploration of different sounds, they also had a real talent for writing punchy choruses and hummable melodies.

They did not seem content with being just another weird indie band. They wanted to be the next U2, the next Coldplay. And I bought into it completely. Every song on Night Visions is absolutely killer, and though their sophomore record had it’s issues, moments like ‘Summer’, ‘Friction’ and the gorgeous, anthemic ‘Shots’ more than redeemed it.

On ‘Believer’ the problems that clouded Smoke + Mirrors; over-production, choppy structure and scouring vocal gymnastics, return with a vengeance. Their as yet untitled third album may yet prove their second wind. ‘Believer’ is the sound of a great band losing their knack.